SAN DIEGO, CA - JUNE 28: Eric Hosmer #30 of the San Diego Padres, right, is congratulated by Fernando Tatis Jr. #23 after hitting a solo home run during the sixth inning of a baseball game against the St. Louis Cardinals at Petco Park June 28, 2019 in San Diego, California. (Photo by Denis Poroy/Getty Images)

Padres: Who is Jayce Tingler and why does A.J. Preller trust him? by Cheri Bell
Padres: 3 likely trade partners for Wil Myers this offseason by Jake Mastroianni

In an event heavily promoted by the organization for the last couple of months, the San Diego Padres unveiled their new brown uniforms Saturday night.

The culmination of years of research and fan interaction from the San Diego Padres resulted in three new uniforms that lean heavily on the past while incorporating some new twists.

The evening began with a video montage of iconic Padres players of the past (Randy Jones, Trevor Hoffman and Tony Gwynn Jr representing his Dad) lauding the past uniforms of the organization.

There was a special emphasis on the brown and gold being what distinguished the Padres from other teams.

While noshing on the free hot dogs, popcorn, beer, wine, and soda or water provided by the Padres, several thousand enthusiastic fans (mostly season ticket holders) cheered the players of the past.

The emcees for the evening, Padres broadcasters Jesse Agler, Don Orsillo, Mark Grant and Tony Gwynn Jr served the purpose of an opening act for the players awaiting their debut in the new unis.

The other surprise guest of the evening was new manager Jayce Tingler. He was brought on stage before the uniform presentation as an official introduction to the fans.

His emphasis was on winning and communication with his players. Commenting on the size of the crowd, Tingler vowed to give the fans his best.

Revealed during Tingler’s interaction with our emcees was the fact that the nickname used by the Hispanic players he has worked with is Tinglay. Ting is the nickname he is known by in the rest of the baseball world.

He mentioned his plan to begin flying out to meet and get to know some of the players scattered around the country. Luckily for him, three of the biggest names on the team were on the same field.

Then came the moment everyone was waiting for!

After a loud and enthusiastic introduction, Fernando Tatis Jr strolled onto the stage modeling the alternate jersey to be worn starting with the 2020 season. A dark sand base sporting brown pinstripes with San Diego in brown and gold across the chest, the alternate uni looks great on Tatis Jr but is by far the most different of all the uniforms presented.

Next came Eric Hosmer strutting his stuff in the road unis. A dark chocolate brown with a gold San Diego across the chest, this jersey looks the most like the brown and gold jerseys Padres fans are currently familiar with. It is accompanied by the dark sand pants matching the ones used for the alternate jersey but without the stripes.

Last but not least, Manny Machado makes his entrance to much fanfare and loud cheers. To be honest, all three players received huge ovations when they appeared on stage. Part of the enthusiasm seemed to be for the guys but the enthusiasm for the uniforms was unmistakable.

Machado sported the home jersey. A white base with brown pinstripes and Padres written across the chest in brown and gold. The trim on all three jerseys is brown and gold with a Swinging Friar patch of brown and gold on the left sleeve of each jersey.

Your city. Your colors. #BrownIsBack and it’s better than ever! pic.twitter.com/ykPW6aW4R7

Manny seems to have put the most effort into his prep for the runway. His posing and posturing on stage was met with loud approval. He did seem to be enjoying his moment in the limelight.

The presentation ended with fireworks and all three players posing on stage wearing their respective jerseys.

San Diego, this is who we are.

The Padres presented a fun and exciting program befitting the turning point they are hoping that these changes usher in.

Notable before and after the presentation was the effort by Managing Partner Ron Fowler to interact with the fans. He circulated, unaccompanied, along the perimeter barrier shaking hands, taking pics and answering questions regarding the signing of certain famous free agent pitchers.

The Padres made all the new colors available in new merchandise located in a sales tent near the Park Blvd entrance. T-shirts with the names of Tatis Jr, Hosmer, Chris Paddack and Machado were available along with other brown and gold merchandise.

After the event, the team store was open with the same merchandise along with the jerseys available for purchase. Many satisfied fans were seen leaving the park carrying the old blue shopping bags with the new brown and gold merchandise inside. 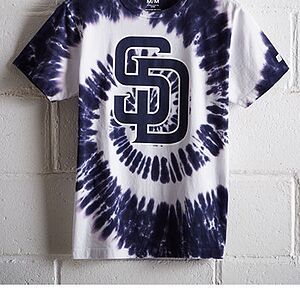